No apologies for today’s theme, of course; my maternal great-grandfather was a Stoker on HMS Aboukir, who died on 22nd September 1914, in the sinking of that warship, and my maternal grandfather, his son, was an Able Seaman, who died aboard HMS Lawford on the 8th June 1944… 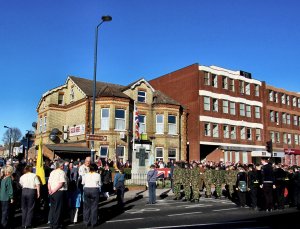 The War Memorial in North Finchley, shortly before 11 a.m. today

Noor Inayat Khan, British SOE operative in France in WW2. A long-time heroine of mine, she was born in Moscow, on New Year’s Day, 1914, and was executed at Dachau on 13th September, 1944. A commemorative sculpture of her was unveiled in London’s Gordon Square on Tuesday of last week.

The British Navy War Memorial to Submariners who died in the two World Wars. Situated on the north side of the Thames, between Waterloo and Blackfriars Bridges.

Break of Day in the Trenches

The darkness crumbles away
It is the same old druid Time as ever,
Only a live thing leaps my hand,
A queer sardonic rat,
As I pull the parapet’s poppy
To stick behind my ear.
Droll rat, they would shoot you if they knew
Your cosmopolitan sympathies,
Now you have touched this English hand
You will do the same to a German
Soon, no doubt, if it be your pleasure
To cross the sleeping green between.
It seems you inwardly grin as you pass
Strong eyes, fine limbs, haughty athletes,
Less chanced than you for life,
Bonds to the whims of murder,
Sprawled in the bowels of the earth,
The torn fields of France.
What do you see in our eyes
At the shrieking iron and flame
Hurled through still heavens?
What quaver -what heart aghast?
Poppies whose roots are in men’s veins
Drop, and are ever dropping;
But mine in my ear is safe,
Just a little white with the dust.